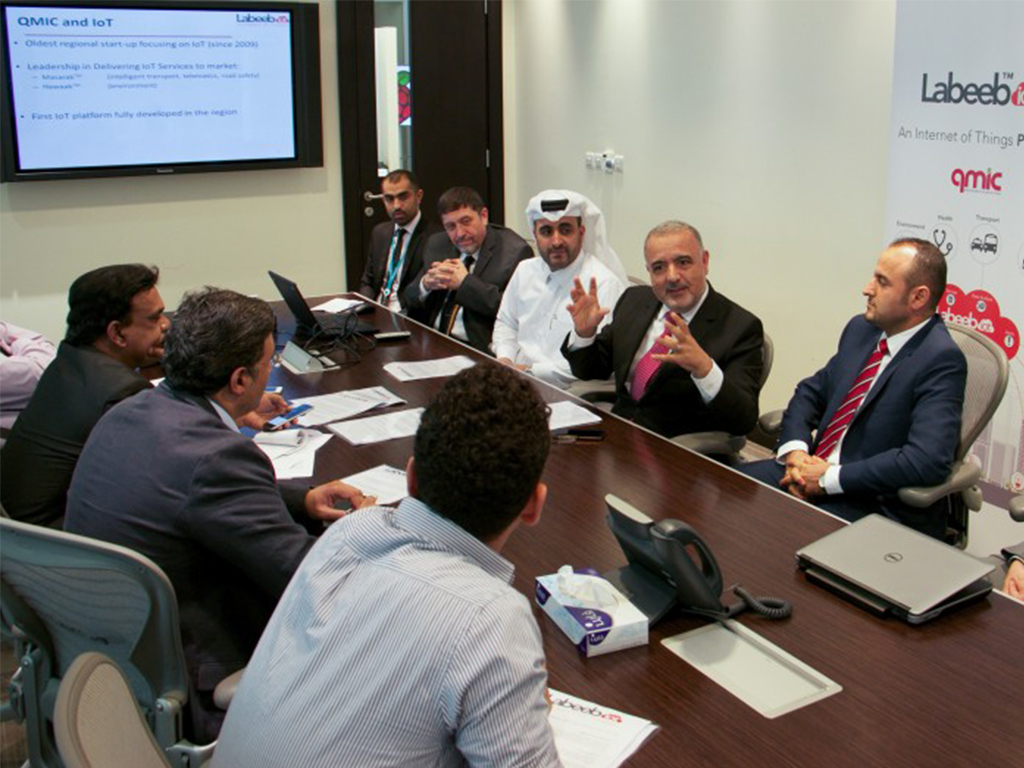 QMIC Launches the First IoT Platform Developed in the Region

Qatar Mobility Innovations Center (QMIC) announced the launch of the first Internet of Things (IoT) platform that was ever developed in Qatar and the region (Labeeb™ IoT). The announcement was made during a press conference hosted at QMIC’s offices at the Qatar Science and Technology Park and which was attended by QMIC’s senior staff and a number of local media organizations.

The Labeeb IoT platform together with an extensive set of development kits and enablers will play a significant role in enabling developers, startups and enterprises to develop and deploy new IoT services and applications that serve different vertical markets quickly and at a lower R&D cost. Although the platform and its associated enablers are initially targeting research centers, entrepreneurs, and startups in Qatar and the Region, it can equally serve international markets from this stage and will be expanded later this year to focus on the important enterprise and the government sectors.

QMIC has been working in the area of IoT since its inception in 2009 as its original business plan was focused on collecting sensor data wirelessly and translating such data into services and applications that serve the need of different market segments such as transportation, health, utilities, etc. Subsequently, QMIC established market leadership by developing and deploying its own IoT services in the area of intelligent transport (Masarak™), road safety (Salamtek™), and environment (Hawa’ak™). Using such expertise and experience, QMIC decided to develop and launch an IoT platform that can be used by third parties to develop their own services and applications. This innovations strategy of QMIC proved to be timely as the IoT is becoming one of the mega trends that will shape most industries in the coming few years. Hence, most industry analysts expect the impact of IoT to reach 4-11 Trillion dollars per year by 2025. This impact will be realized through a combination of improving efficiency and productivity and through the introduction of new services and business models.

On this occasion, Dr. Adnan Abu-Dayya, the Executive Director and CEO of QMIC said ”As the oldest regional start-up in the important area of IoT, we are very pleased to announce the availability of our Labeeb IoT platform and development tools; the first locally developed platform in the region. This is a key element of our enablement strategy where we want to enable local entrepreneurs, startups, researchers, and enterprises to play a bigger role in realizing the IoT business potential and in creating local digital businesses in the process of doing so. We are equally excited by the international dimension of this platform as it can be offered to global users as well. The launch today culminates few years of effort by our team at QMIC, and represents a milestone towards expanding the Labeeb IoT portfolio to allow monetization of IoT services and adding key enablers that support the needs of specific vertical markets”.

Dr. Abu-Dayya continued to say “We have been engaged in discussions with many potential partners in Qatar and we are encouraged by the level of interest and excitement that we have seen. Furthermore, we are pleased to report that many strat-ups, research teams, and individuals have already started using the current verion of Labeeb IoT to realize their innovative ideas and build their own IoT products and services”.

The Labeeb IoT platform can facilitate the collection and storage of data from any object (or device), translate the data into actionable insights, and enable delivering a wide range of IoT services to various market segments like oil & gas, healthcare, utilities, smart cities, and many other verticals.

In addition to the platform, the Labeeb IoT initiative provides different SDKs (software development kits), an application development environment, and online and customized training to facilitate the development of IoT services and to eventually create a community of developers and adopters of IoT services in the region.

The Labeeb IoT initiative will be used to set up an IoT Smart Living Lab which will allow QMIC and its partners to lead the industry in realizing the full potential of IoT technologies.